In this Amazon Seller's Week in Review, Julie Spear, our Operations Manager, shares her take on recent news highlights and what these could mean for brands selling on the Amazon marketplace.

Last week, Amazon announced plans to grow its UK staff by 25% throughout 2017, adding 5,000 jobs to its London office and throughout the UK. Positions will run the gamut according to Doug Gurr, Amazon’s UK country manager: “We are hiring for all types of roles from flight test engineers, software engineers and corporate managers in our development centers and head office, to operations managers, supervisors, engineers, service technicians, HR roles and order fulfilment roles in our fulfilment centers". The expansion will also include 3 additional fulfillment centers in Tilbury, Doncaster and Daventry.

In more EU news, Amazon also announced plans to add 1,500 jobs in France and open its fifth logistics center in Poland. The new center will be located in the southern city of Sosnowiec. Amazon added 2,500 jobs in Poland in 2016 and is said to have invested more than 3 billion zlotys ($737 million) in the country since 2014. 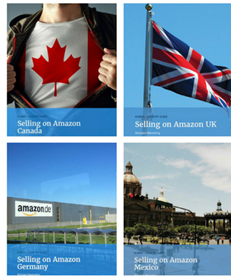 Planning to expand your business to international markets using Amazon?
We have just the right thing for you.
Click here to receive access to our
dedicated country guides that will teach
you how to start selling on Amazon
Canada, Germany, UK and Mexico.

Amazon Web Services continues to expand with the addition of the video conference app, Chime. Amazon Chime offers customers the one-click feature they love while shopping on Amazon.com but this time, the click allows them to start or join audio and video meetings on iOS, Android, or desktop devices. With features that include screen and content share, Chime aims to resolve the issues many people experience on other platforms like Skype.  With no PIN required users can more easily join conference calls, using any device.  The basic version of Chime is free while paid versions offer user management features, message history storage, and VoIP Support.

One Click Retail shared an analysis of Amazon’s Q4, focusing specifically on Housewares. Housewares accounted for 15% of Amazon’s Year over Year growth in 2016, generating almost $7 billion in sales. Figures from the International Housewares Association indicate the total value of the U.S. Housewares Market was $80 billion in 2016 showing 9.4% YoY growth.

Amazon holds 8.5% of that total market. These numbers prove more interesting given the fact that housewares products are generally heavy and more expensive to ship. You could conclude customers value the ease of purchasing online and home delivery over a potential increase in price due to shipping. Customers’ priority of ease and efficiency is further evidenced in some of the top selling products in this category:  iRobot Roomba Vacuum Cleaner (37% YoY growth), Keurig K-Cup Coffee Maker (61% YoY growth) and Instant Pot Pressure Cooker (53% YoY growth). 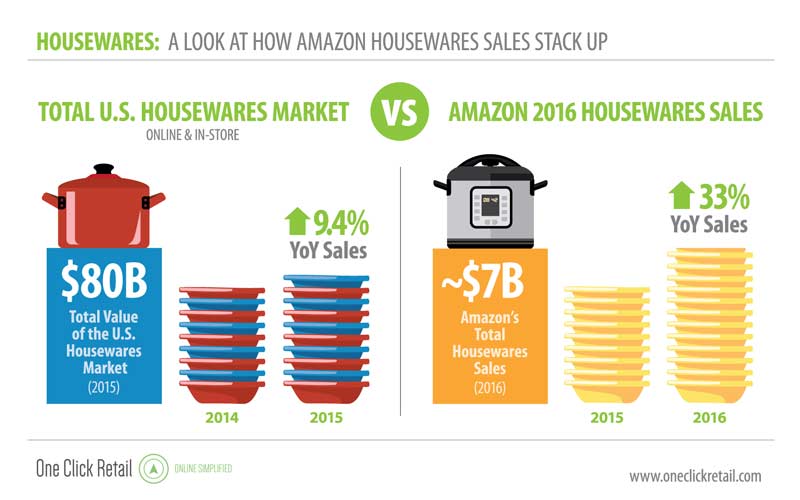 The Housewares product group proved to be one of the main drivers of Amazon’s success.

Speaking of Walmart… while specific dollar amounts were not shared, Walmart released their Q4 2016 earnings and reported 29% increase in online sales. They are now the second largest online retailer as measured by revenue and continue to aggressively expand their catalog of products offered to customers. Taking steps like acquiring Jet.com, ShoeBuy and Moosejaw make it evident that Walmart is committed to growing their online retail footprint.

After earning the highest score of 86.27 on the Harris Poll, Amazon decided to share the love with its customers. The poll surveyed customers on topics including social responsibility, emotional appeal and workplace environment.

Customers who spent $50 or more on Feb. 22 received a discount of $8.62 off their purchase. Jeff Bezos congratulated Amazon employees for the high marks in an email saying, “These accolades are a direct result of this team’s obsession over customers, pioneering spirit, commitment to operational excellence and willingness to lean into bold bets.”

Until next week's round of Amazon Seller's Week in Review, join us in our private community for brand owners and Channel Managers on Facebook: Amazon Chanel Mastery for Brands. We share insider tips about e-commerce and selling on Amazon. This is where you can get to know us, and your peers, a little better.

How to protect your brand on Amazon from unauthorized sellers