Time for the weekly recap of Amazon news! It's always good to keep up with events related to the fast-moving world of the Amazon ecosystem. I select the most important news updates to share with subscribers each week, which you can sign up to receive right here.

Prime Membership Bumped Up To $119, But Will People Care?

Last week, Amazon announced that it will increase the price for Prime membership from $99 per year up to $119. The Prime program is central to Amazon’s growth “flywheel,” locking consumers into an ecosystem that provides free, 2-day delivery and digital services like Prime Video.

So will the price hike affect Amazon’s ability to attract new members and customers?

Past experience tells us that this price hike isn’t likely to have a material impact on membership and loyalty. Amazon raised the fee for Prime in 2014 from $79 to $99 per year, and membership is estimated to have increased by from 40 million to 54 million from 2014 to 2015.

Similarly, Netflix has increased their monthly subscriptions twice: a $1-per-month increase in 2017, and $2-per-month in 2015 across their most popular plans. The hike seemed to have had no effect on membership growth, with an estimated 125 million customers today.

In the same way, Prime has become such an integral part of the daily ritual for so many people, that they couldn’t fathom life without it. Eighty-five percent of Prime members browse for products at least once a week, and nearly half (45%) make a purchase at least once a week, according to a Feedvisor survey of 1,500 Amazon shoppers. 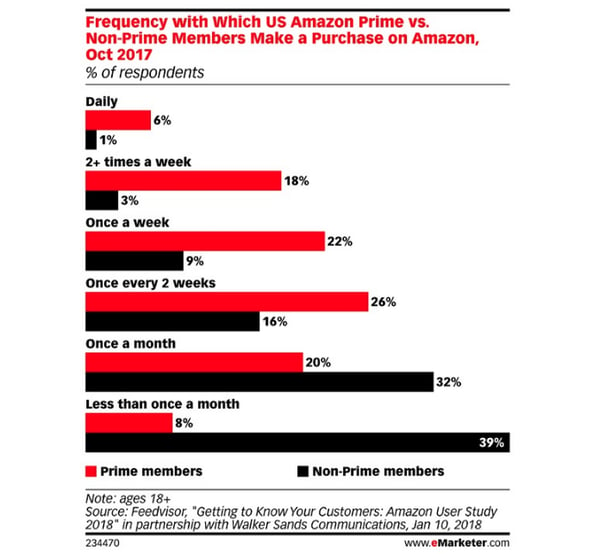 Amazon recently announced that they have more than 100 million subscribers and that the number is growing. Many equity analysts also believe that Prime membership will continue to grow. Even after this price hike, the utility that Prime offers is still good value for money, especially for consumers who have come to value the convenience and ease of use.

It would be a stretch to assume that the price increase will make the Prime program profitable for Amazon. There are massive costs associated with offering free 1- or 2-day shipping nationwide, which few consumers appreciate. But with a higher price point, Amazon will be able to offset the increasing operating costs of the service as they build up their fulfillment infrastructure in the United States and abroad.

In its first-quarter earnings report on Thursday, Amazon announced an increase of 50% of sales from global sellers from the previous year. This comes with mixed blessings for other suppliers and sellers on Amazon. Unvetted overseas sellers are sometimes claimed to be largely responsible for counterfeit goods and fake product reviews. And the huge number of new global sellers entering the market means it’s imperative for all Amazon sellers to differentiate their own offering from the growing pack.

Chico's will start selling on Amazon

Chico’s will start selling its clothes and accessories on Amazon in May, and potentially add its sister brands White House Black Market and Soma later. The brand will make all of its products Prime-eligible -- presumably through a direct vendor relationship with Amazon, or through using the Fulfillment By Amazon program. Amazon has been investing heavily in its apparel division, forging partnerships with brands like Nike and Calvin Klein to prompt them to sell more of their assortment on Amazon. The company has also been launching its own private apparel labels too.

According to interviews that AdAge conducted with advertising agencies, Amazon is testing a pixel that will track conversions on Amazon.com from display ads. Brands would place the pixel within their external (non-Amazon) ads, which would track users who viewed or clicked the advertisement to see if they eventually bought the product on Amazon.This kind of tracking and conversion data could potentially allow Amazon to prove a stronger, more direct ROI than incumbent advertising platforms from Facebook and Google.

"Advertisers can leverage Amazon's specific data for targeting, there's unique access to inventory through Amazon properties, and there are unique analytics by virtue of its sales data," said a source quoted by AdAge.

This is all the news I have to share with you this week. Subscribe to our newsletter to make sure you receive my news recap next week!