How to Prepare for Amazon Prime Day 2017

In July 2017, Amazon will host its third Prime Day, a 30-hour retail event exclusively for Prime members. It’s Amazon’s birthday celebration, but instead of expecting to receive gifts, Amazon invites customers to buy some for themselves!

With the past two Prime Days producing record-breaking sales for brands selling on Amazon, this event can actually be considered a gift to brands. The exact date for this year’s Prime Day hasn’t been announced yet, but we know that it will be some time between July 10 and July 16. Unlike past years when it was a 24-hour event, this year Prime Day will run for 30 hours (from 6:00 p.m. to midnight PDT on the day before Prime Day, plus the 24 hours of Prime Day itself). It’s basically a day and a half of deals and discounts for Prime members. Amazon has also alluded to the possibility of a “Prime Day Week” this year, which might mean they have plans to promote more than just a single day of deals.

The past two Prime Day events were held on the second Tuesday of July, so it seems likely that Prime Day 2017 will fall on July 11. No matter which date Amazon chooses, there are approximately seven weeks till the big day, and brands need to start preparing now in order to make the most of it. 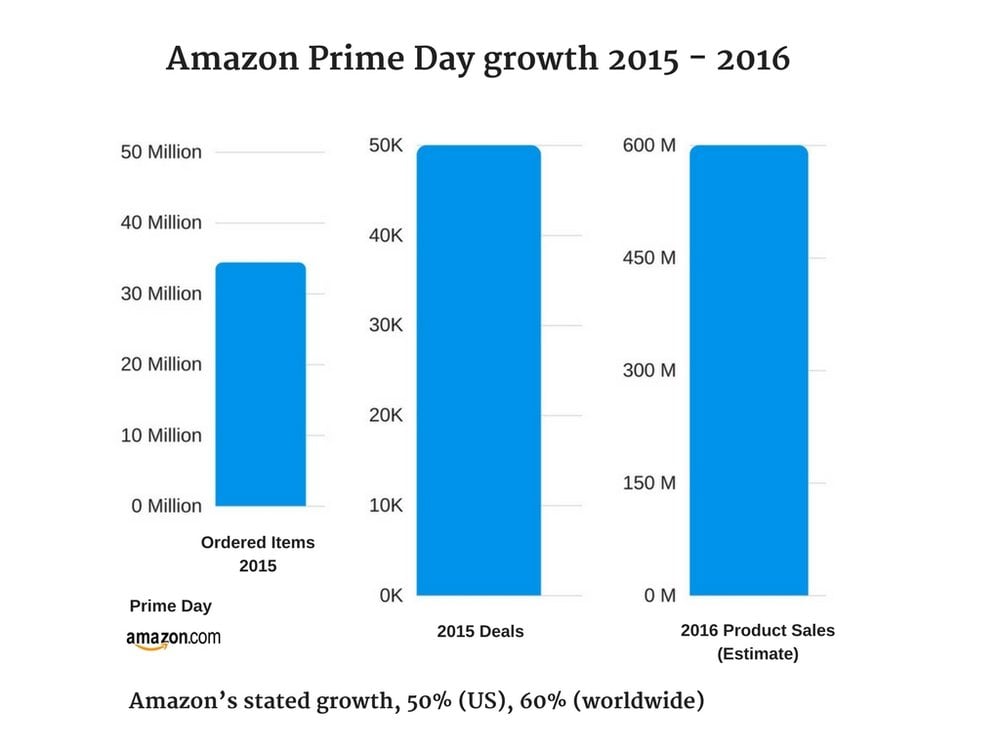 How to know if you’re invited

Every year Amazon handpicks some Sellers to run official Prime Day deals. The Sellers chosen for 2017 received messages from Amazon during the week of May 15 inviting them to submit Lightning Deals for Prime Day. However, keep in mind that receiving an invitation does not guarantee that your deal will actually run. 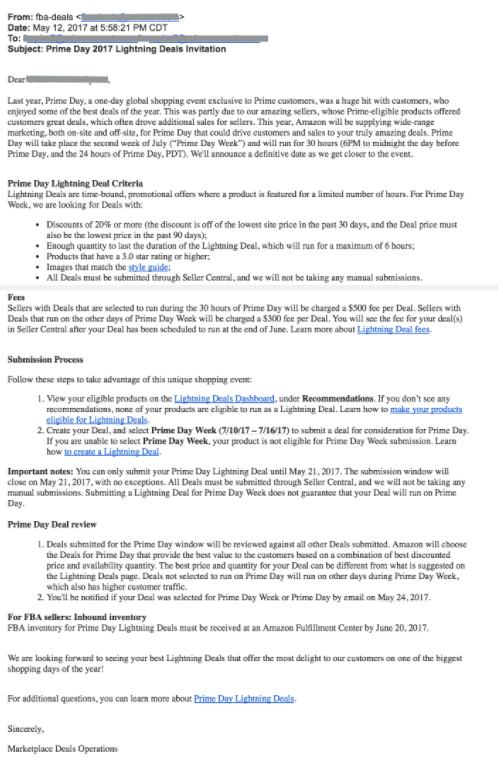 Amazon specified in the invitation exactly what it’s looking for when deciding which Deals will run:

According to an invitation received by one of our clients, brands that are selected to run a Deal during Prime Day will be charged a $500 fee per Deal.

What to do if you’re not invited

Even if your brand is not selected for an official Lightning Deal, you can still take advantage of a halo effect generated by the buzz of Prime Day. Because it’s such a highly publicized event, people will be logging on to Amazon in droves to check out deals and purchase things they’ve had their eyes on for a while.

Here’s the 3-step Prime Day strategy we’re putting in place for clients of Bobsled Marketing in 2017.

Review your current assortment of products and decide which ones you want to promote. Then stock up! Running out of stock is a guaranteed way to miss out on the boosted traffic and open wallets of Prime Day. Amazon suggests having your inventory arrive at its fulfillment centers before June 20. Don’t leave this till the last minute because fulfillment centers are likely to be overwhelmed with inbound shipments and may take longer than usual to receive your inventory.

2. MAKE YOUR OWN DEALS

Catch the attention of shoppers on Prime Day with some genuinely attractive discounts on your products.

3. GET YOUR DEALS FOUND WITH PPC

Amazon has reported that “clicks on product advertisements paid for by Third-Party Sellers grew 150 percent” on 2016’s Prime Day. This tells us that investing in PPC (Pay-Per-Click) advertising definitely works to maximize the number of eyes on all the great deals and promotions you have planned. The best way to drive awareness and traffic to your product listings is through PPC campaigns. Amazon Sponsored Products can help your products surface at a higher place in organic search results, and other ad types like Product Display ads and Headline Search ads can even direct potential customers away from competitors and toward your product listings.

With just seven weeks to go, now is the time to start planning your Prime Day strategy. We anticipate 2017 to be the biggest year yet in Prime Day’s short history, so make sure that your brand takes full advantage of this big opportunity.