Is Amazon Live a Waste of Time?

Kyle Porter is a Client Project Manager at Bobsled.

From time to time, a client will ask me some version of the question: is Amazon Live worth the investment?

For the uninitiated, Amazon Live is the e-commerce platform’s live-streaming tool, and it features an eclectic group of celebrities, influencers, and occasionally brand owners recommending products in the style of a QVC show.

When you visit the Amazon Live page, many of the streams you see are from third-party influencers who operate on affiliate commissions. Amazon gives these streamers a cut of profits for each product they sell. Celebrities like Kyle Richards of The Real Housewives of Beverly Hill fame regularly take to Amazon Live to pitch products.

Amazon Live is still relatively new, and brands I talk to aren’t always sure what to make of it. Is it worth exploring? My answer is usually yes—but it depends on how established you are as a brand.

Amazon Live is a cheap conversion driver. Though Amazon Live doesn’t have targeting features the way, say, Sponsored Display ads might, it is a good way to get your products in front of people who are looking to buy. Say you get featured on a makeup tutorial stream—chances are, many of those viewers are already shopping for makeup.

My best advice is for brands to use Amazon Live to push products that aren’t already their ‘cash cows’ or top sellers. Amazon Live can be a great, affordable way to launch a new product or give a renewed push to a slow-moving product. You can also offer a discount code to viewers of the stream, which is a great way to drive impulse sales.

Recently, the reality TV star Paige Desorbo featured one of our beauty clients, in her livestream on Amazon. Prior to the stream, that particular product was selling 44 units per week. After it was featured, Amazing Cosmetics started moving roughly the same volume per day.

The drink brand Nutrabolt also found success on Amazon Live when it organized a stream with Kevin Hart. It drove a 3:1 return on spend and amassed around 1 billion impressions—making it the largest brand moment of the year for Nutrabolt.

Only use Amazon Live if you are already established on Amazon. Amazon Live isn’t for everyone. Generally, Amazon Live makes the most sense for large- and mid-sized brands. Why? It is simply a more speculative marketing tactic, and there are other approaches with a more certain return on investment.

Amazon Live shouldn’t be one of your first touchpoints with the platform. You want to establish yourself and your products on Amazon before you begin investing in Live. That means running Sponsored Product and Sponsored Display ads, mastering your keywords, and investing in a sophisticated product detail page before you allocate spending to Amazon Live.

Okay, so I’m ready to start on Amazon Live. What should I know?

You should probably use third-party partners. Some brands want to create Amazon livestreams by themselves, on their own channels. But creating your own studio, plus hiring employees to shoot and host a livestream, can get pricey quickly. In-house streaming only makes sense if you’re a major brand that already has the infrastructure in place to conduct livestreams.

The best move is probably to work with an  influencer who streams on Amazon Live. If they like your product, these influencers will sell it to the public in exchange for affiliate commissions from Amazon, so the upfront cost to you is minimal. All you need to do is convince these influencers that your product is worth it for them to feature.

Need to find influencers? Start with a promo code. If you don’t already have a stable of influencers you work with, Amazon has a built-in tool that helps you get your product out there to its own affiliate influencer network. All you need to do is create a promotional social media coupon code, and then check a box asking to share that code with Amazon’s influencers. This is a great way to entice influencers into buying your product at a steep discount. Then, if they like the product, they might talk about it in their next livestream.

You can also reach out to influencers directly, potentially offering them free products in the hopes they might feature you on a future livestream. When choosing influencers to contact, you should think about their audience. To maximize conversions, you want the influencer’s audience to align with the target audience of your brand.

Consider partnering with Amazon. Sending your discount codes to third-party influencers who stream on Amazon is always a good idea, but if you want to diversify your strategy, there is another way to appear on Amazon Live: work with Amazon directly.

Amazon produces its own set of livestreams using their own studios, including one show called Amazon Live Deals. Brands can pay to have their products featured in these shows. The exact pricing varies, and there is a minimum spend of $50,000, but this could be a worthwhile investment for brands hoping to boost their conversions. 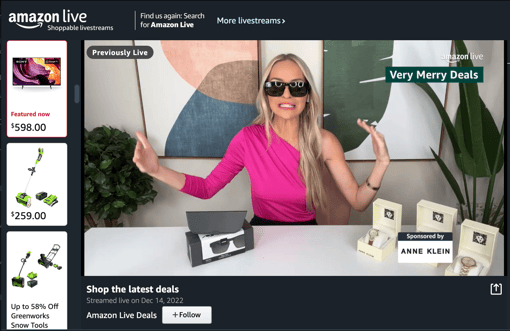 Your livestream can show up in multiple places. The main Amazon Live page, Amazon.com/Live, doesn’t seem to be a highly trafficked section of Amazon at the moment. But keep in mind that your stream won’t just appear on Amazon.com/Live. If you’re lucky, the most popular streams surface on the Amazon homepage, which can dramatically boost the number of people tuning in. 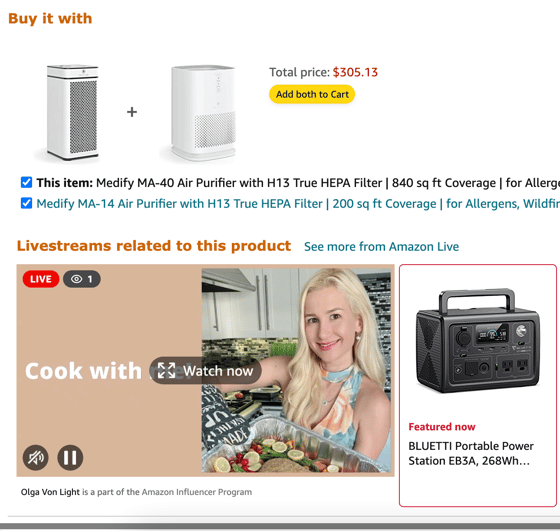 Pay attention to the new insights features. Amazon released a package of new Amazon Live features in November 2022, suggesting that it remains dedicated to building out Amazon Live as a tool for brands.

One new feature in particular is worth highlighting: Product Revenue Insights. Up until now, Amazon Live was a bit of a black box for brands. Its Channel Analytics Dashboard tells creators how many product views they drive, but it does not specify when a livestream will actually convert a sale.

With the new Product Revenue Insights tool, however, Amazon now lets you more directly attribute your sales to Live. You can see the revenue and units sold for each product in the stream, giving brands a glimpse for the first time into which of their products are getting the most traction on Amazon Live.

Bottom line: Amazon is only getting more competitive, and in such a highly saturated environment, differentiating yourself however you can is critical. If you are an established brand that already optimized the other aspects of your Amazon strategy, then adding Live to your marketing strategy can help you stand out.

Want to figure out how to build an Amazon Live strategy that fits in with the rest of your spend? Get in touch with us for more.

Keyword Restriction on Amazon: What to Do When Your Listing is Removed