The Definitive Plan for Navigating e-commerce and Jewish Holidays

When it comes to the gift-buying season, most businesses think about Christmas first. They’re not wrong to do so—the holiday drives billions in retail sales every year—but they’re also neglecting huge populations within America’s diverse cultural landscape. There’s the well-known Hanukkah, which also takes place in December, but those of the Jewish faith celebrate a number of holidays throughout the year.

This might seem like a rich opportunity to target consumers ahead of these holidays, but there are certain risks—not all of these holidays have a gift-giving tradition. At best, a mistimed campaign targeting gift-giving for Tish’a B’Av, which does not involve gifts, is a waste of time and money. At worst, it drives customers away—no one wants to feel that they or their traditions and beliefs are misunderstood, particularly if it’s at the receiving end of a marketing campaign.

That said, with a comprehensive strategy, a business can build a base of knowledge to create sophisticated, targeted, and cost-effective campaigns to make the most of these specific gift-giving holidays.

When most people think of Jewish holidays, they think of Hanukkah. They’re not wrong to do so, but Hanukkah is only one event among many others. Other major holidays include Purim, Pesach (Passover), Shavuot and Yom Kippur, among others, each with a different purpose and a different assumption about gift-giving.

Rosh Hashanah, for example, celebrates the new year according to the Jewish calendar, and isn’t used as a basis for gift-giving—not unlike the standard New Year’s celebration on December 31. On some holidays, like Purim, it’s considered acceptable to offer certain types of gifts, like food, in the shape of mishloach manot, also known as a Purim Basket.

Hanukkah itself is a complex holiday, and it’s not the Jewish equivalent of Christmas. Instead, the purpose is to commemorate rededication of the Holy Temple (the Second Temple) in Jerusalem. Observers of the holiday light menorahs (the nine-branched candelabra), eat traditional foods, and spent time engaging with a number of customs, from music to games for children. A marketing campaign that assumes Hanukkah has anything to do with Christmas would be a grave mistake—the only similarity is the general time of the year in which both holidays occur.

When do these holidays occur?

Jewish holidays operate on a different calendar, so their start and end dates vary year to year. Brands should take time at the beginning of every new calendar year to make themselves aware of the discrepancies—this year, Hanukkah begins 18 days later than in 2015. Brands not prepared for this change might release a campaign at the wrong time—imagine spending good money on a pay-per-click (PPC) campaign that asks customers to buy after the holiday begins on December 7th, 2016.

Other Jewish holidays are the same, which means that brands should take time at the beginning of each calendar year to perform a survey of the upcoming Jewish holidays for the year and adjust their plans accordingly. Staying flexible is key, and helps keep key players on their toes regarding all elements of the campaign.

What gifts are given for these holidays?

On gift-giving holidays, food is often acceptable, particularly the aforementioned mishloach manot, or a fruit basket. Challah, chocolate, wine, pies, latke, and hamantash are often used to create gift baskets. Brands should stay aware that when food is involved, Jewish gifts should adhere to kosher standards, which eliminates pork, shellfish, and certain game, and necessitates stringent guidelines for food preparation. A brand creating campaigns that sell non-kosher foods for Jewish holidays will simply be wasting their money.

In the case of Hanukkah, brands shouldn’t push consumers into buying gifts for anyone beyond their own children—Hanukkah gift-giving rarely extends beyond that, because that’s not the core of the tradition. Many Jewish parents give their children gifts during this time because they don’t want their children to feel left out of Christmas. Campaigns should show awareness of this fact, and that the same gifts aren’t necessarily applicable for both holidays. 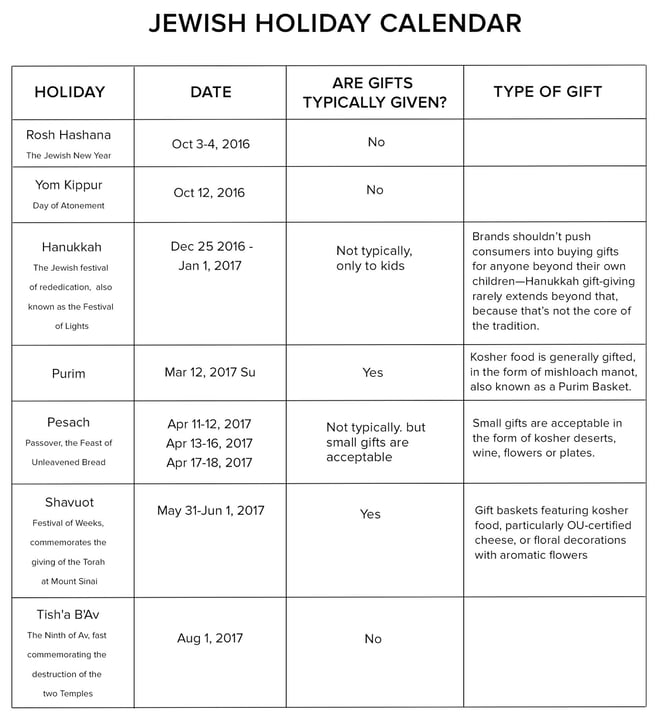 How can a business be prepared?

Some holidays that, in the past, were not meant for gift-giving, are transitioning into ones where giving gifts is acceptable. During the rush of the 2016 holiday season, brands need to do their research and plan accordingly. Same goes for the start and end dates, particularly if they’re changing dramatically compared holidays on the Gregorian calendar, like Christmas.

If a brand strategies correctly, they can actually take advantage of these annual discrepancies.

Because Hanukkah comes later in 2016, there is an opportunity for brands to get continued sales through the second half of December, which simply wasn’t possible last year. Sellers that ensure they’re stocked for demand through the entire month of December will likely have much rosier revenues to report at the end of the year. Don’t let inventory run out after the first half of the month, and especially not after Christmas Eve.

All these techniques can help brands stay aware of new opportunities among their Jewish customers, but the truth is that there is far more information that can be used to fine-tune campaigns and stay aware of changes year over year.

Related: Our 2016 Amazon Holiday Selling Guide for Brand Channel Owners and Marketing Managers available here outlines our top-selling strategies for brands that want to make the most of the busy Q4 selling season.

With all the information in hand, it’s possible to stay both culturally-sensitive and business-aware. The holiday shopping season is coming quick, and with the economy humming along, it’s bound to be a big one—it’s never too soon to make the decisions that will put your brand ahead of the competition during peak periods of opportunity.